Let me start by saying that I did not want to run this race. I’ve been training almost exclusively on the trails for my upcoming 50k so the thought of pounding out 26 miles on the road was not that exciting. But with that being said, it was a well-timed long run, a great venue to test my hill climbing strength, and a place to really nail down my fueling strategy for the 50k. I wasn’t planning to race it. But really, who am I kidding? It’s ALWAYS a race. My public goal was to not wreck my legs, but my secret goal was to place in the top 10. Even top 5 maybe. Last year I also ran the marathon as an “eh, it’s there I might as well” race. I negative split it in a big way and ran a 3:11, which was good for 7th female and 2nd in my age group. This year I was stronger, faster, and more prepared so I figured I could do at least that well without blowing myself up for the 50k. But I still told everyone I was keeping it casual in case things didn’t go well.

Cut to race morning, 5:30am. I’m in Wave 1, surrounded by all these tall, wiry elite-looking people, feeling just a bit out of my league. The guy on the mic started counting down. “3… 2…. 1………” We all stood there, finger on Garmin, waiting for a “GO!” or a bell or something. A few seconds pass before someone in the crowd yells “GO.” A few runners jump, and then eventually someone takes off so we all follow. I tried to keep my effort level on the low end, check my ego, ignore the people passing me. My legs were moving really well and I was surprised to see my watch tick off 7:00 miles. Pon was at mile 3 to collect my arm warmers (pre-6am, bless him). I flashed a smile and yelled “I went out too fast and I have to pee already!” as I coasted by. He told me I was fifth female. And that was the end of my non-competitive race. I cruised by lady number 4 on the bridge. The top three were coming back across the bridge before I even got to the turnaround so I conceded that I had no chance of catching them and would be happy to hold onto fourth.

I got lots of cheers from the Bay Birds at the Vista Point aid station and sailed back across the bridge. The race was fairly uneventful for a while. I bombed down the long Lincoln hill while chatting with some guy from Minnesota. A quick glance at my watch showing 6:15 pace made me reel it in, but then passing through the Impala water stop at mile 11 got me so pumped up that I sped up again. Oops. The race then cut across 27th Ave where the traffic course redirection crap started. I was with a group of three guys who got redirected onto 26th Ave to run to the park. The problem, though, was that the course marshals who were supposed to be directing us didn’t do too great of a job. At one point there was a meter maid cart parked in the middle of 26th so it appeared that we couldn’t go through. The guys in front of me looked around confusedly at the course marshal, and she looked around confusedly before pointing us past the cart.

My coach gave me a goal of getting to the half in 1:35 so I didn’t go out too hard. Because, believe it or not, I tend to do that sometimes. I hit the half in 1:31, so yeah, I went out too fast. But I was still feeling pretty fresh at that point. I thought running through Golden Gate Park would be a breeze because I know it so well, but that’s exactly what made it so boring and painful. I knew all the hills inside and out. I was running by myself for a good part. And I wanted it to be over. My pace slowed as I found my motivation drifting. Passing the First Half finish line was a big tease and the thought of stopping flickered through my head. It was just a training run, after all.

I felt a huge relief after getting out of the park at mile 19. Only seven stupid, mostly downhill miles to go. I always forget how steep the Haight Street hill is. One year I was out cheering on runners and I saw a woman eat it. She just dove headfirst into the pavement. So my only goal was to not do that. The roads were really quiet, very few people out cheering. We wound our way into the Mission, down 15th Street. As I ran by my street I staring longingly at my apartment, thinking how nice it would be to go take a nap.

The last 4 miles, all in the Dogpatch, is the hardest part of the race. The roads are flat but it’s a ghost town. There are a ton of turns. A total grind. You’re tired and all you’ve got around you are big warehouses and the stench of urine. Good motivation to get out of there fast, I guess. There was a bit more confusion about which way to go (I don’t know why this is even an issue, but it was) and finally I get back onto the Embarcadero. My pace picked up slightly around AT&T Park when the finish line and all the balloons were finally in sight. OH BUT WAIT, why are these two metal barriers across the middle of the road? It appeared as if the road was closed. I look around for a sign or someone to point me in the right direction, but naturally there was no help. A guy about 25 yards in front of me ran around the barrier, so I did too. I was so glad it was over and so thrown off by the last 100 yards of the race that I didn’t think much about the fact that I just came in 4th (!!!) and ran a 3 minute PR. Whew. 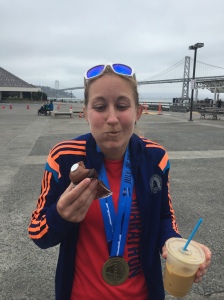 Proper refueling is the key to success.

After all the course confusion and misplaced barriers (which caused the second place male runner, Jorge, to end up in third. SF Gate politely called it a “small glitch”), I’ve made a decision to never pay to run this race again. Sure, it’s convenient and I always know tons of people running, but for the amount they charge it is not worth the frustration of race day confusion. The crowd support is almost non-existent (come on SF! It’s an excuse to get up early and party. You LOVE that shit!). The pre-race organization is nowhere to be found (I’m still feeling sorry for the race announcer desperately calling for help at the start. His cries went unanswered, leading people to break down the corral barriers). And they don’t even offer prize money to the winners. But hey, at least they didn’t run out of water this year.

Now I’m not saying I know anything about being a race director, but I’ve run enough races to know when things work smoothly. I’m sure it’s tough trying to organize 5 different races (ultra, marathon, 2 halfs, and a 5k) but it’s time to get your shit together, SF Marathon. There is work to be done if this race is ever to be considered world class. If you want some help, just gimme a call. I’ve got some big ideas.

There was an error retrieving images from Instagram. An attempt will be remade in a few minutes.